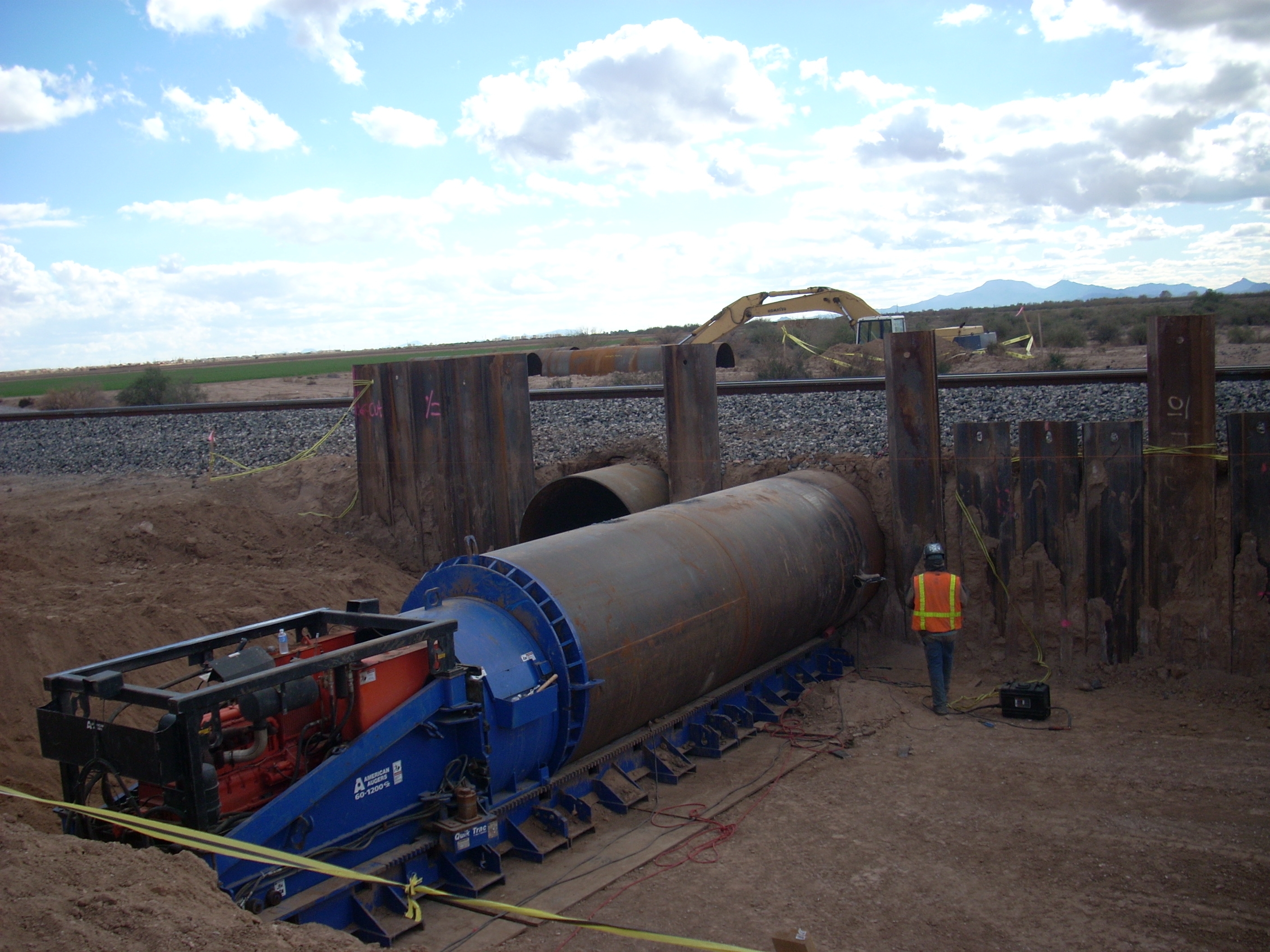 When Jason Clark of Iowa Trenchless first saw the plans for a large diameter auger boring project in Arizona, he knew that just one contractor couldn’t meet the aggressive timetable laid out in the bid proposal, which called for more than 500 bores.

The project was for the Union Pacific Railroad (UPRR) as it readied a portion of its rail to be double tracked. The auger bores were needed to install large diameter steel casing in preparation of the storm drain installation under the existing track.

Clark called good friend Dan Liotti at Midwest Mole to see if he was interested in tag-teaming the project, which Clark thought to be one of the largest, if not the largest, auger boring project to ever be tackled. Of course, he first had to prove to Liotti that the project indeed called for 500-plus bores.

“I’m pretty certain that this is the biggest auger boring project that’s ever been done, with regard to the number of bores and size in a single project,” Clark said. “When I first called Dan [Liotti], he didn’t believe me. He told me, ‘You’ve got to be kidding.’ He didn’t believe me until he saw [the plans]for himself.”

The contracting trio are about two months away from completing this extensive auger boring project that when finished will have involved more than 520 bores to install large diameter storm drains along a stretch of the Sunset Route of the Union Pacific Railroad. This UPRR line runs from California to El Paso, Texas, and eventually to New Orleans; right now, it’s a single set of tracks. The railroad is in the process of double-tracking a majority of the Sunset Route in order to increase the efficiency of its freight traffic. Double tracking will allow freight traffic to move side by side when trains come from the opposite direction, instead of one having to pull off to the side.

The work being done in preparation of the double tracking is occurring while the existing track is in operation. The auger boring work is located along a 103-mile section of the Sunset Route in Arizona between the cities of Estrella (located southwest of Phoenix) and Tucson, where there are sections of nothing in the area intertwined with small towns and a larger city — a little bit of everything. Crews mobilized at the end of November 2007, with plans to wrap up the work this November. As of late August, approximately 420 bores have been completed.

To accomplish a project of this magnitude, eight boring machines were mobilized. The machines consisted  of a Barbco 36/48, three American Augers 48/54s, two American Augers 60/72s and two Barbco 60/72s.
The bores themselves went very well and ran as expected once they got rolling, the contractors say. Pits were constructed, typically 40 ft by 58 ft, and used for as many as five or six bores at one location. After the bores were done at each location, the setup was moved to the next location down the track. Sometimes that move would be a quarter of a mile, and other times it was 20 or 30 miles.

What made the project unique is the partnership of the three contractors — a first for all three involved and unusual for such a project. Cooperation and communication between all three was critical to making this work. There was also extensive pre-planning.

“We did a lot of planning between the three of us and there was a lot of coordination going on, especially
early in the project,” said John Iles, vice president of operations for Pacific Boring. “Once everyone got there and got rolling, it more or less takes care of itself.”

As boring crews progressed, Ames has started installing the pipes on to the casing and, likewise, when areas are ready, UPRR has begun track construction.

The bores range from 36 to 84 in. in diameter and are relatively short in length, between 35 and 50 ft on average. Pacific Boring agreed to handle the smaller bores (36- and 48-in.) and the larger ones are bored by Iowa Trenchless and Midwest Mole (60-, 72- and 84-in.). Each contractor would supply a certain number of crews. At the project’s start, there were seven crews in operation; as it begins to wind down, there are two or three at one time.

With a project of this size — and with the number of bores and distance involved — logistics plays a crucial role. Iowa Trenchless’ Rick Seimers serves as the project superintendent and the distance between the crews working keeps him busy, traveling up and down the line each day as he oversees the work. Midwest Moles’ Dan Dudley is the project engineer.

Each morning, crews meet for a safety meeting and then are disbursed to the day’s work, which could be anywhere along the line, depending on what sections have been approved through permitting for construction. Early on, a lot of the challenges dealt with getting familiar with how each contractor handles setup and actual boring.

“Each person within your own company may set up a bore differently from each other so imagine how that exists between companies,” said Midwest Mole project manager Dave Howell. “Each individual foreman will auger bore their own way. We call it more of an art than a science.”

“For the most part, everyone worked together as a group,” said Clark. “We considered ourselves one contractor out here as far as the general contractor Ames Construction was concerned. We each have our own contracts but we all worked together and helped each other out. It’s worked very well.”

One of the daily safety challenges for the crews is the trains running on the track while they work. Keeping the railroad safe is the most important aspect of the project. Railroad flaggers are onsite to notify the crews that are working within 25 ft of the rail to clear the area when a call comes in that a train is approaching their worksite.

“When you have 100 trains a day coming by and you need to shut down and clear the area from the time the train calls in until it’s gone, it definitely affects your production. But it is part of the safety requirements you must follow when working near the railroad,” Clark said.

Another challenge was dealing with the numerous obstructions underground as boring got under way. The 103-mile stretch the crews are boring in has many buried rocks, as well as slag and boulders. “There are structures underground that were installed over 100 years ago that have been covered up and the information as to what those structures was lost over time. We have encountered existing structures that are near the current structures. We’ve hit bridge piers, big chunks of slag, which was used as fill in this area,” said Howell.

Beyond the rocks that the crews are finding in the ground, a few of the local natural hazards have made their presence known. It’s not unusual in the Arizona desert for scorpions and rattlesnakes to be found here and there. “It’s been a wild project,” Iles said. “The guys would move casings and find scorpions and rattlesnakes. They actually had a rattlesnake come out through one of the augers … he didn’t quite make it alive.”

All three contractors said the project’s success is a tribute to the work of the crewmembers and their ability to adapt to the working conditions presented to them on any given day. “This is such a big project. I don’t know if one boring contractor would have been available to get this done,” Seimers said. “The men adapted well and all the credit should go to the guys.”

“The crews have done a phenomenal job,” Howell said. “They are doing good work and getting it done in a safe and timely fashion under unique conditions that no one was used to.”