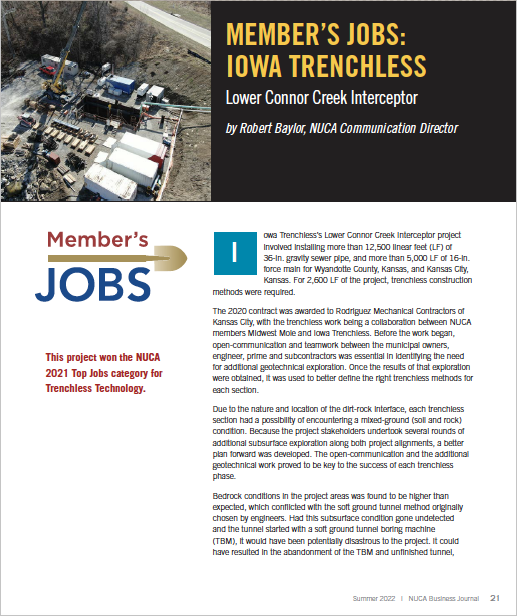 Kansas. For 2,600 LF of the project, trenchless construction

The 2020 contract was awarded to Rodriguez Mechanical Contractors of

Kansas City, with the trenchless work being a collaboration between NUCA

members Midwest Mole and Iowa Trenchless. Before the work began,

open-communication and teamwork between the municipal owners,

engineer, prime and subcontractors was essential in identifying the need

for additional geotechnical exploration. Once the results of that exploration

were obtained, it was used to better define the right trenchless methods for

Due to the nature and location of the dirt-rock interface, each trenchless

condition. Because the project stakeholders undertook several rounds of

additional subsurface exploration along both project alignments, a better

plan forward was developed. The open-communication and the additional

expected, which conflicted with the soft ground tunnel method originally

chosen by engineers. Had this subsurface condition gone undetected

and the tunnel started with a soft ground tunnel boring machine

(TBM), it would have been potentially disastrous to the project. It could

have resulted in the abandonment of the TBM and unfinished tunnel,

or emergency excavation in the roadway right-of-way

a significant disruption to the public, along with additional

costs would have followed. This supplemental subsurface

exploration saved the owners and contractors a substantial

amount of expense and additional work.

A unique mix of three trenchless methods were used to cross

a local highway and a Class 1 railroad track:

discovered a bedrock knoll between the tunnel’s start and

of the original route, which led to the tunnel’s realignment

was required by Kansas DOT interstate requirements and to

This crossing design was completed with an Akkerman 480

59.5-in. OD Permalok steel casing as the initial tunnel liner

and pushed with a 1200-ton hydraulic jacking frame. The

production rates as high as 60-feet per shift, with an average

of 35-feet per shift. Lubrication of the tunnel was also a

contributing factor in the successful installation, with no

Tunnel B was designed to be installed in 1,300 feet of

interbedded limestone and shale bedrock, but little was

known about the quality and characteristics of the rock.

Communication and the additional geotechnical work

route. This led to the decision to use a custom-built 66-in.

wood lagging as the tunnel liner, with sets being built behind

the ATM and expanded to match the 67.25-in. cutterhead

The decision to select this segmented tunnel lining approach

was found to be the key to success, as it significantly

reduced the jacking required for the 1,300 foot crossing.

Tunnels A and B each housed the final product of 36-in.

sewer for the municipality owners. The final product pipe

was threaded, blocked, and grouted in place with lowdensity

Other trenchless methods used for the project included

24-in. and 30-in. steel casings installed using an Akkerman

What made this project unique was the panoply of

work being performed within a single contract: A strong

the need of additional geotechnical work, and the physical

Successful communication and strong collaboration by

many challenges of this project and made it a success.

Iowa Trenchless was able to perform the work within the

proposed schedule. The lessons learned by the project

• Strong communication between the project’s

stakeholders, starting before the first phases of any

rock formations that changed the original plans and

cost estimates before any construction began.