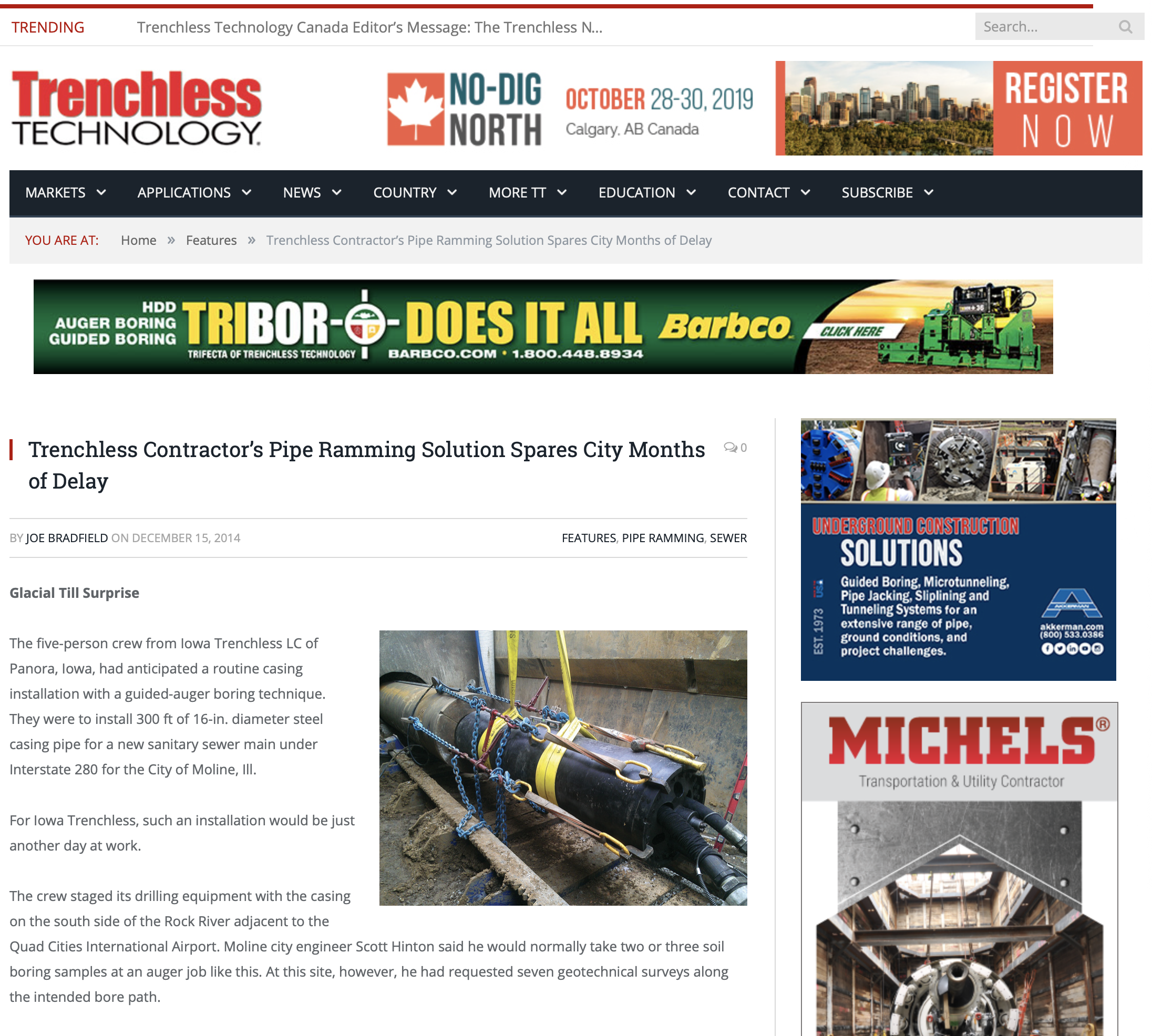 The five-person crew from Iowa Trenchless LC of Panora, Iowa, had anticipated a routine casing installation with a guided-auger boring technique. They were to install 300 ft of 16-in. diameter steel casing pipe for a new sanitary sewer main under Interstate 280 for the City of Moline, Ill.

For Iowa Trenchless, such an installation would be just another day at work.

The crew staged its drilling equipment with the casing on the south side of the Rock River adjacent to the Quad Cities International Airport. Moline city engineer Scott Hinton said he would normally take two or three soil boring samples at an auger job like this. At this site, however, he had requested seven geotechnical surveys along the intended bore path.

All samples indicated the unworked soil below the road was sand and pebbles, with some clay. This was consistent with what had been observed in open-cut work already in place leading to and from the intended bore, as well as previously performed auger bores in the near vicinity. That’s why no one could have been prepared for what they saw when general contractor Valley Construction excavated the entry and exit pits. The holes were full of river rock, cobbles and boulders varying in diameter from 3 in. to more than 3 ft.
“We attempted to proceed with our intended method of installation but very quickly confirmed what we already suspected: It would not work,” said Iowa Trenchless president Jason Clark.

Hinton said relocation was out of the question. Changing a run location under an interstate highway requires a change in state permitting, a process that would likely take several months. Letting the project sit idle that long was unacceptable, Hinton said, since the job had to be completed before spring.

Iowa Trenchless had the solution. “What else could you do?” Clark said. “We couldn’t auger. We couldn’t microtunnel. Pipe ramming was the only way to go.”

Pipe ramming is another one of Iowa Trenchless’ specialties. Its crews have experience ramming pipe up to 84 in. in diameter and are equipped for larger installations. After consulting 15-year veteran HammerHead regional manager Nate Hrabosky, and with confidence based on their experience on previous projects, Iowa Trenchless made the proposal to the City of Moline and Valley Construction.

Clark and Iowa Trenchless operations manager Rick Siemers, who was in charge of installation on this job, believed more than doubling the casing diameter to 36 in. would allow it to swallow most of the boulders as it encountered them, and a thicker wall pipe would be heavy enough to break larger rocks into manageable pieces. It would be stiffer, as well, making it less vulnerable to deflection from cobbles to stay on grade. As long as they kept below an existing water main directly above their path with the larger casing, and without running into any unusual features of the shallow limestone bedrock immediately below, the project owner had a good chance at avoiding a lengthy relocation delay.

The City of Moline gave Iowa Trenchless approval in mid-January. By Feb. 7, the casing and equipment were onsite ready to go. The casing selected was 36-in. diameter, ¾-in. wall thickness, X70 high-strength grade steel. Ramming equipment consisted of a 24-in. pneumatic hammer from Hammerhead Trenchless Equipment, powered by two 1,600-cfm air compressors. HammerHead specialist Kent Westendorf was onsite, ensuring that all equipment had arrived and was functioning optimally, prepared to assist in any way Iowa Trenchless might require.

City of Moline inspector Chad Collins was onsite daily with the crew. It was his first time seeing a pipe ramming project. “Rick Siemers had a wealth of knowledge of this type of work. I was amazed not only that his crew could get the pipe moving each time they started up, but that they could push 36-in. casing through 300 ft of ground like that,” Collins said.

Moline, at that point, was experiencing the coldest temperatures of a record-setting winter.

“It snowed quite a bit, and temperatures would fall to minus 23 degrees at night, never getting much above 10 degrees during the day, but they never complained about it. It was a tough process, too. It may take them 40 minutes to hammer a pipe in, but then it would take three to four hours of pipe setting and constant welding before hammering the next pipe,” Collins said.

Despite the subzero temperatures, there was water everywhere. Iowa Trenchless ran several pumps to keep conditions dry enough for the crews to work in, Clark said.

For seven days the ramming crew hammered the casing, starting before dawn and ending after dusk. Each morning when they started again, the pipe broke loose, moving freely. Clark said the combination of water and granular ground conditions kept the pipe from sticking. In fact, to keep the pipe moving forward in the beginning, Iowa Trenchless “leaned into it” with its auger boring machine. Otherwise, insufficient skin friction permitted bounce-back during reciprocation, hindering progress.

On Friday, Feb. 21, the crew had just about finished ramming the 11th piece of casing, when progress came to an abrupt halt. They were stuck at 219 ft, 6 in. Seimers was unsure whether the obstruction was a large boulder or an anomalous ridge of bedrock. He and Clark explored their options. For further guidance they consulted HammerHead’s ramming experts. They would try cleaning spoil from inside the pipe and then try to ram again.

Eleven times the Iowa Trenchless crew had to back the augers out to manually remove rocks too large for their auger flights. When 180 ft of pipe had been cleared, they resumed ramming but only moved 6 in. more by the end of the day. It was just far enough to let them weld on the 12th length of casing.

Returning Monday morning, they tried again. For an hour they rammed without movement. “We were just about to pull the plug,” Siemers said, “when we busted loose. The next 20 ft went in in less than 45 minutes.”
Iowa Trenchless finished in two more days without any further problems. With all 300 ft of casing in place, the crew contact-grouted the exterior of the casing with low-density cellular concrete, installed custom spacers on the carrier pipe and threaded it through the casing, leaving the City of Moline with a high-quality installation to complete its sewer project on schedule.

Clark and Siemers attribute the success of the project to the hard work and dedication of the crew, who worked through record-low temperatures to keep the project moving forward until its completion.

Joe Bradfield is senior writer for Ellenbecker Communications, an international communications firm specializing in the construction, drilling and mining industries